The general symptoms that indicate a diabetic condition are:

Adding on to the general symptoms of diabetes, men may go through the following:

Women too may face additional symptoms in combination with the general symptoms, namely:

Symptoms of diabetes can also vary depending on the type. Symptoms that indicate type 1 diabetes are:

Symptoms that may point towards type 2 diabetes include:

Symptoms for gestational diabetes are not easily identified as most women don't experience any. For the majority of cases of gestational diabetes, it is diagnosed during routine blood sugar testing or through an oral glucose tolerance test performed typically between the 24th and 28th week of the pregnancy.

However, in the rarest of circumstances, symptoms that may indicate to gestational diabetes during pregnancy are:

The reasons for the development of diabetes in an individual are largely due to the following:

Type 1 Diabetes: Medical practitioners are yet to find out exactly what causes type 1 diabetes. While many are of the opinion that genes play a key role in this, it is possible that the immune system that mistakenly fights and kills the beta cells in the pancreas that manufacture insulin could be triggered by a virus.

Type 2 Diabetes: This disease may be caused by a combination of lifestyle and genetic factors. Other factors that may also contribute as a significant cause is being overweight or obese. Carrying additional weight on the body, especially in the abdomen region, pushes the cells towards being more resistant to the impact of insulin on the sugar in the blood.

Gestational Diabetes: Hormonal changes during pregnancy is the primary cause of gestational diabetes. During this time, the placenta that connects the mother and the child in the womb generates these hormones that make the mother's cells less responsive to the powers of insulin causing high blood sugar throughout the pregnancy period. Being overweight prior to pregnancy or gaining weight more than necessary during this period is a likely cause of gestational diabetes too.

Hereditary and environmental factors are also leading causes that trigger diabetes in individuals and for them, we have the best diabetes treatments in India.

Who is most at risk of developing diabetes?

The risk of diabetes is increased due to certain factors including:

Children or teenagers are likely to be at risk of developing type 1 diabetes is the parents or siblings carry specific genes that are linked to the condition.

You are more at risk of developing type 2 diabetes:

The risk of gestational diabetes is likely to be on the rise:

Testing for diabetes is important to confirm the diagnosis. The following diagnostic screenings may be recommended by your healthcare provider:

To diagnose prediabetes and diabetes:

To determine if there a possibility of gestational diabetes during the pregnancy, the doctor may prescribe the following tests between the 24th and 28th weeks of pregnancy:

Treatment can begin as soon as the diagnosis for diabetes has been confirmed.

The following types of treatment are applicable depending on the type of diabetes:

You may also be prescribed medications that will help to regulate and control the blood sugar levels in the body. 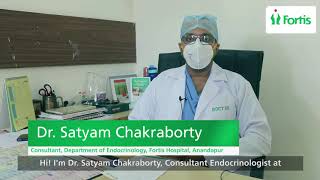